I think I may have fucked up something majorly today… I connected my new Zotac 1080 Ti to my motherboard (ASUS z270-A) using a M.2 to PCIE connector. I plugged in the riser USB and power as follows: 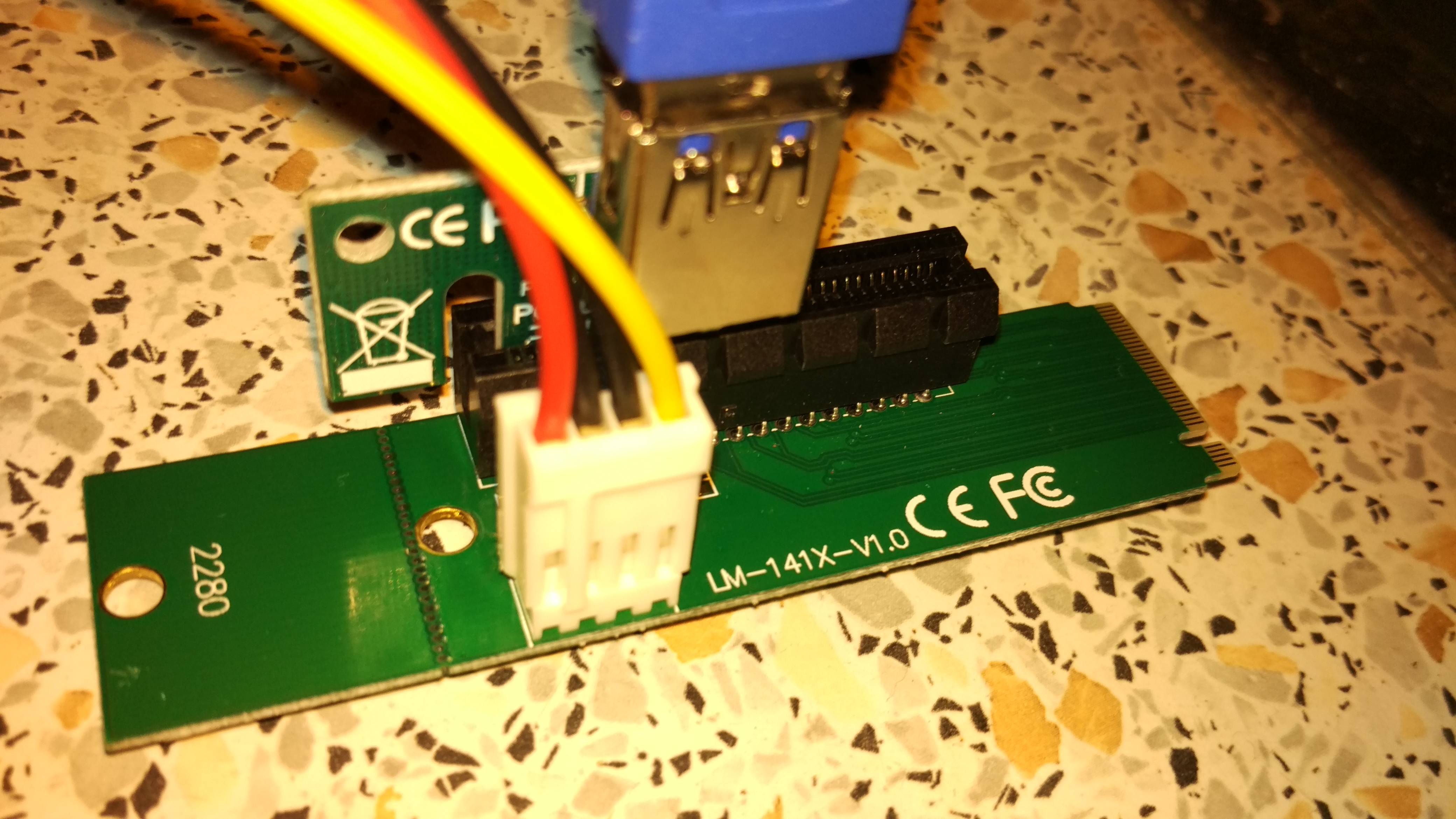 To clarify I have powered the connector M.2->PCIE from a power source (using MOLEX). The riser attached to it was ALSO powered from the same source (by MOLEX as well).
When I turned on the PC, card flashed blue and refuses to accept any command.

Riser also seems to be dead. Did I connect it wrong, or perhaps the card is defective and took out the riser as well? Any ideas appreciated.

Silly question but I’m assuming that you plugged the riser into the M.2 slot as well right?

Yeah I did. Double checked everything too.

Edit: OK, I have checked the card in a normal PCIE that is directly on the motherboard and it’s fine. This card just refuses to work with any riser. I don’t know what is going on, this is my 3rd identical 1080 Ti and the others work fine. I’ll try to swap everything around if I can find what is the culprit.

OK, so I got it to work (mostly). The wiring was correct, I have two M.2 slots on motherboard… One works, one doesn’t for some reason. Note: you don’t have to power the M.2 connector if you use a powered riser (it makes no difference on my machine).

The only issue now is the following error message that gets spammed in the console: 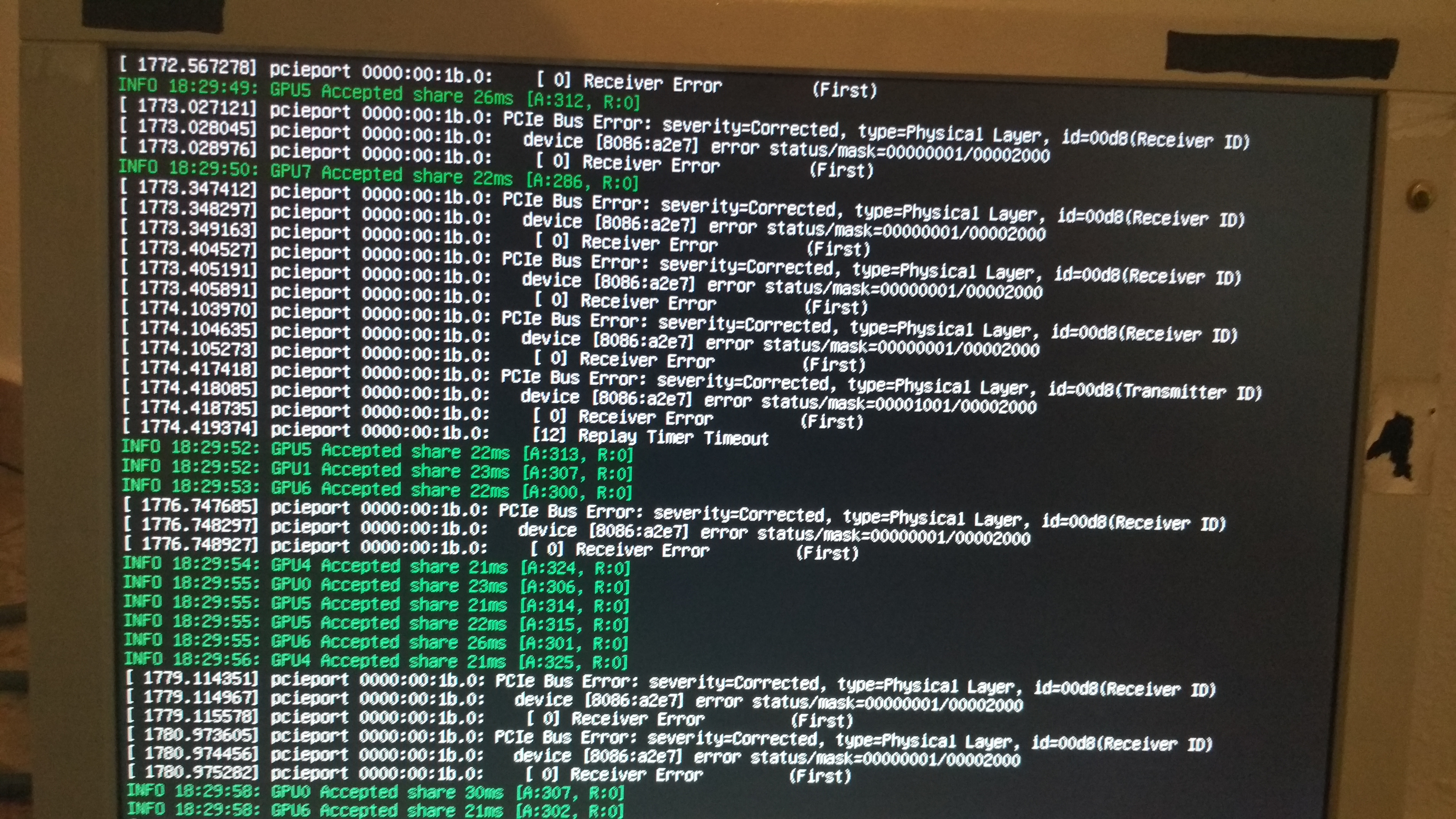 Seems that there is no impact other than the console spam though, so I’m happy the GPU works at least.

My mobo BIOS has auto / sata / pcie options for M.2 slots – you could try changing that if it exists?

That error is a bit concerning though. I’d guess a hardware problem. I think these adapters (like risers) are engineered as essentially disposable parts with poor quality control. I always order half again of what I actually need and spread between different suppliers to avoid bad batches.

Sorry for my bad english. I’ve tried M.2 to PCIE, like you have. It’s workin not good, due to poor contact in pci-e slot. Now I use M.2 to usb 3.0 adapter
NOTAYO NGFF M.2 to USB 3.0 Transfer Card M2 to USB3.0 Adapter for PCI-E Riser Card
and all work is fine

and all work is fine

Is this a joke? Does this really work?

Yeh! I can give a proof, if you need

Yeh! I can give a proof, if you need

I believe you! That’s simply incredible! I’m amazed, where did you buy these from?

make sure you have a M2 PCI-e compatiable slot

not all M2 is really PCI, some emulate SATA/SAS … and those WONT work with risers

so make sure you choose the right mainboard.

I tried various settings through BIOS, but no dice. I have managed to stop that error from spamming the console via this solution:

So far so good. However I must admit that I don’t understand whether that boot command just gets rid of the error message or the underlying problem as well.

Did you use the GRUB_CMDLINE_LINUX_DEFAULT="quiet splash pci=nomsi" command? I think that just suppresses any PCI-related error messages… But if it’s made the card work then all good!

Further down that thread there are two other suggestions:

Disable PCI Active State Power Management in your BIOS. Could be called ASPM or PEG-ASPM. Should be easy to test.

Or if you’re more daring try updating your kernel http://www.omgubuntu.co.uk/2017/02/ukuu-easy-way-to-install-mainline-kernel-ubuntu)