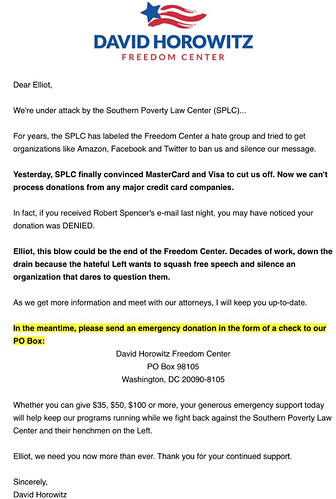 image661×981 277 KB
i don’t even like these people, but i will not stand by, and do nothing as authoritarians strip peoples’ ability to conduct business for simply voicing their opinion. this is disgusting, and they will not stop at the ebil alt right. they are attacking normies nowadays.

leftists that don’t tow the authoritarian line …you’re next.

The Southern Poverty Law Center’s critique of Horowitz is detailed, well-researched and thorough. In general I’ve found the SPLC to be a pretty reliable source of information on hate groups. Note however that they do not list the David Horowitz Freedom Center as an “extremist hate group”, for which they have pretty strict criteria (here is their complete list of US-based hate groups). Of course they would have the right to do that if it fit their criteria. I also cannot find any support from a reliable source for the contention that SPLC lobbied Visa or Mastercard to cut off credit card donations to the David Horowitz Freedom Center.

It’s also quite ironic that the David Horowitz “Freedom Center” publishes its own list of leftist organisations that it would like to censure (will not link, but it’s referenced from the Wikipedia article). I guess hypocrisy is just par for the course for the right.

If this group is associated with that white supremacist Richard B Spencer, then fk them and fk all of those who support it. The SLPC is a reputable group who does good work. If Horowitz embraces Spencer’s values, then he and all of his adherents need to be dragged over broken glass, there’s no changing them.

To Mods: Kindly kill this thread. It’s a lever into a discussion not suited for this forum here.

was enjoying the comments, until i bumped into your post. if you’re not interested in the thread, ignore-it. calling for mods to shut-it-down is a bit cringy, tbh.

side note - according to this David Horowitz - Wikipedia
would be very strange for david to be associated with actual nazis. my point is they started this with the far right, then nationalists, now center right. only a matter of time before they move left.

creepy-thing is they’re getting shut-out-of commerce by large corporations, because their opinions. the future seems bright for crypto, that’s for sure.

have a feeling my friends on the left won’t wake-up until it’s too late (it’s too late, social contract has been destroyed). as-an anarchist, corporate sponsored censorship, and authoritarianism bothers me. the left seems okay with this, hopefully the rightwing won’t do the exact same to the left once they have power. make no mistake, this works in cycles, and the right is retaking power.

can anybody give me an example of censorship working longterm in the west? oh well lol

on that note, i cannot support censorship, and will try my best to no longer post on the forum… i do support ZEC still, and will lurk the forum to make sure everyone is posting safely. been fun, have a good one!

on that note, i cannot support censorship, and will try my best to no longer post on the forum… i do support ZEC still, and will lurk the forum to make sure everyone is posting safely. been fun, have a good one!

I feel ya kek

Please quote any post I have made calling anyone a Nazi…that’s just outlandish and you make too many poorly informed assumptions.

This thread is a backdoor attempt at levering a discussion about Left V Right by using Authoritarianism and censorship as the cover.

The reality is that MC and what appears to be a hate group are both private organizations, both of whom are free to transact business as they see fit. It’s not “Authoritarianism” as you put it, since that is limited to government:

Authoritarianism is a form of government characterized by the rejection of political plurality, the use of strong central power to preserve the political status quo, and reductions in the rule of law, separation of powers, and democratic voting. Political scientists have created many typologies describing variations of authoritarian forms of government. Authoritarian regimes may be either autocratic or oligarchic and may be based upon the rule of a party or the military. States that h The politic...

Ironically, the organization referenced in your OP advocates for the very authoritarianism you decry with most of those types calling for slavish devotion to authority. However, Mastercard is a business. If you don’t like their policies, don’t use their product. No one has some right to access them, and you seem to confuse the distinction between rights and privileges.

Sorry you don’t like accountability, but that’s the way it works. If someone spouts off something others don’t like, people will speak up about it. While I support one’s right to free speech, as odious as it may be, I also support others’ rights to shout them right back into the caves from where they came. And if you @kek support this group referenced in your OP, please, go educate yourself on things, and if you cannot, crawl back into your hole and just go away for good.

[Moderation edit by @daira: @kek didn’t indicate that they supported the group in question.]

first thing you did is equate a jewish dude to nazis, without researching anything.

This thread is a backdoor attempt at levering a discussion about Left V Right by using Authoritarianism and censorship as the cover.

i don’t vote, and care-a-less about politics. this thread is about monetary censorship over opinions. this is very relevant to cryptocurrency.
no-way i’m going to waste my time reading the rest of your political tripe. plz don’t @/myaccount anymore, and plz avoid my threads, because you don’t seem mature enough for these types of topics. thanks!

going to make sure all the people you hate are utilizing zcash to prevent corporate monetary censorship ^.^
“we don’t pass judgment when we move value.”

Authoritarianism isn’t restricted to governments. It’s not a good thing that MasterCard and Visa are in a monopoly position over credit and debit card payments.

This, however, was not a good example to use, partly because it is obviously politically divisive, and partly because we shouldn’t credulously believe, as the right-wing press did, what the David Horowitz Freedom Center said about the reasons for their card processing being shut down. (For a start, they’re not directly listed on the SPLC’s hate group list, although they fund a group that is.)

If we want to promote Zcash as an alternative to centralised payment systems, we need to get our facts straight, not jump on whatever news seems convenient.

@kek and @phakov: The David Horowitz Freedom Center funds Jihad Watch which is run by Robert Spencer, not Richard Spencer (and Jihad Watch is listed, for good reason, as a hate group by the SPLC). Easy to mix them up; they’re both fascists.

my point:
been watching this happen for a year plus from an uninterested viewpoint (fundamental traders need to view the world an antiseptic way, because emotions will lose a trader money). quick-n-dirty analysis: they started testing this out on actual nazis because they knew nobody would defend them. problem is they haven’t stopped with actual nazis. they moved-on to conspiracy theorists, and now boomer normie conservatives are starting to feel the pinch. they started by deplatforming them on socal media, then they attack the payment processors. imo, only a matter of before they move-on-to the anarchists. when finished with anarchists they’ll take out the far left, then they’ll attack liberals. it’s spooky because i’m watching it happen in real time.

okay, on that note hope y’all have a good day!

I don’t find it troubling to know that large social media organizations control who accesses its content and services. These are not public in nature and are free to run their operations as they see fit. Access to those services are by contract and agreement, not right. If Twitter wants to shut off some imbecilic nutter for his nonsensical conspiracy theories, such is life; he agreed to use the service in a way that is a controlled by contract, or TOS. Twitter owns their platform and will control who uses it and how they do so.

There are plenty of examples of cry babies who enter into a contract for their own gain and then piss and moan when the terms are contract are enforced in a way not to their liking…then they always say, “let’s sue them…there ought to be a law…it’s not right”. Boo hoo…it’s the contract, you agreed to it for your own benefit, live with it and STFUAI.

Anyhow, to point directly at the heart of this matter: I’m not too excited to know that ZCash could be used to support the goals of right wing lunatics. It bothers me considerably.

(It is one of the potentially troubling matters the communication officers at ZCash should think on. There may be a time when the news jumps on it and starts to hoist the banner of “there ought to be a law to stop it…”. It may be advisable to have prepared statements ready for use when the day comes that some hate monger sends ZCash to some lunatic suicide bomber or something).

However, I would prefer to see the ability to make private financial transactions than not…but be assured that the real “authoritarians”, you know, like what we have in most parts of the world, who are actually controlling massive government power, will never stop their efforts to prevent or control private dealings of people all over the world.

influential anti war activists are probably next to get the “nazi treatment”… micheal tracy is one to watch, he’s a journalist, and probably a coal mine canary. once he’s deplatformed, you’ll know they’ve moved-on to the left. i’m not too concerned with social media deplatforming BTW (it’s just part of the process) . it’s monetary censorship that worries me. shows-me people running the world are okay with starving people when they don’t like their opinions.

Visa and MasterCard did not “start testing this out” on Nazis; they started blocking donations to organisations representing controversial political causes several years ago. WikiLeaks for example, whatever their faults, are not Nazis.

possibly a fair point, would need to figure-out exact timing on lesser known fascist orgs started to be denied. wikileaks might’ve been one of the first well known entities to suffer open economic discrimination.

would consider actual fascism to be one of the most controversial/hated political ideologies on the planet.

2017, people that run the world seem to have rolled-out a new process of combined deplatforming/economic discrimination (has intensified after a bunch of internet trolls schittposted a US president into office). wikileaks hasn’t been deplatformed from social media yet, and hasn’t >> lost their domain yet << that’s the next step if people that run things get real tired of wikileak’s spice. know that because watched them test the same process on real fascists.

update: horowitz obviously has friends in high places
“The David Horowitz Freedom Center has had its ability to accept credit card donations restored” 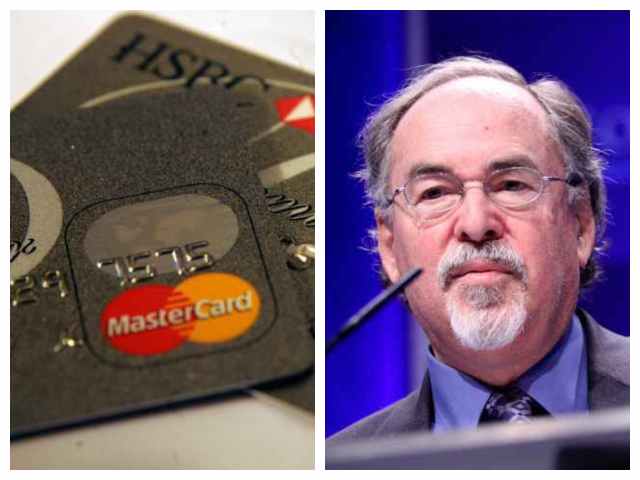 The David Horowitz Freedom Center has had its ability to accept credit card donations restored after the initial decision to financially blacklist the organization. Horowitz credits Breitbart News and the Drudge Report for bringing attention to the...

most people don’t! still creepy they’d try that on a somewhat mainstream normiecon.