NU5 what holders should do?

I do not find it concerning at all. It has nothing to do with the dev work or trust. Ywallet is the official wallet of Ycash. But if you dont want to use it, dont. The code is available on github.

I’m pretty sure it’s because it doesn’t use the SDK.

It’s crazy fast to sync, I use it all the time.

Below is a very clear explanation by @joshs from ECC, which I’ve pasted from the Telegram Community. ZCG plans on funding audits for wallets later this year. 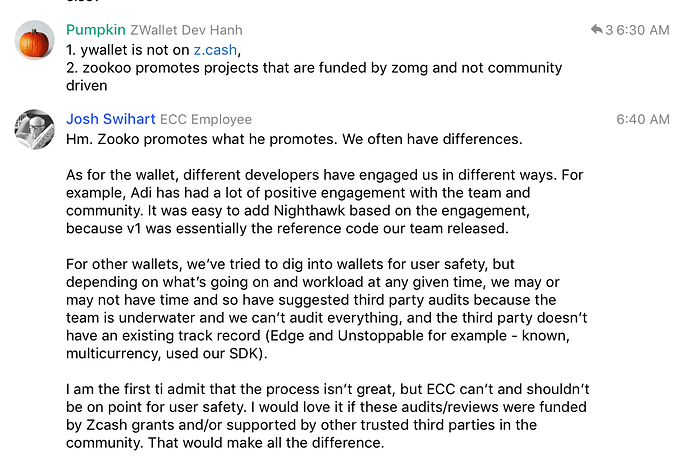 Thanks for the citation and feedback. I stear clear of wallets that haven’t been audited or do not have a track record of privacy/FOSS activism.

Unfortunately, IMO, there are no good mobile lite wallet options that are NU5 ready, fast to sync, and audited/supported by the ECC.

I believe holding ZEC on any of the listed Zcash wallets should be fine. UA support will probably be added over time, after the NU5 activation. Wallets - Zcash

For whatever wallet you pick just ensure you back it up

Also I recommend reading tbe 4.7.0 and 5.0.0 release notes, important information especially if your running a FN with those versions but even still good to know if you aren’t

The following ZIPs are being deployed, or have been updated, as part of this upgrade:

zcashd now has a process for how features of the public API may be deprecated and removed. Feature deprecation follows a series of steps whereby, over a series of releases, features first remain enabled by default (but may be explicitly disabled), then switch to being disabled by default, and eventually are removed entirely.

A new string-valued option, -allowdeprecated has been introduced to allow a user to explicitly manage the availability of deprecated zcashd features. This flag makes it possible for users to reenable deprecated methods, features, and APIs that are currently disabled by default, or alternately to explicitly disable all deprecated features if they so choose. Multiple instances of this argument may be provided. A user may disable deprecated features entirely by providing the string none as the argument to this parameter. In the case that none is specified, multiple invocations of -allowdeprecated are not permitted.

As of this release, the following previously deprecated features are disabled by default, but may be be reenabled using -allowdeprecated=<feature> .

NOTE: All testnet nodes that have been running on testnet above height 1599200 will need to upgrade to v4.7.0 and then run with -reindex and -rescan .

To support the aforementioned testnet consensus changes, the following changes are made in zcashd v4.7.0 :

As mentioned above, all testnet nodes that have been running on testnet above height 1,599,200 will need to upgrade to v4.7.0 and then run with -reindex and -rescan .

Following the upgrade to 4.7.0, Zcashd will require that the user confirm that they have backed up their new emergency recovery phrase, which may be obtained from the output of the z_exportwallet RPC call. This confirmation can be performed manually using the zcashd-wallet-tool utility that is supplied with this release (built or installed in the same directory as zcashd ). The wallet will not allow the generation of new addresses until this confirmation has been performed. It is recommended that after this upgrade, funds tied to preexisting addresses be migrated to newly generated addresses so that all wallet funds are recoverable using the emergency recovery phrase going forward. If you choose not to migrate funds in this fashion, you will continue to need to securely back up the entire wallet.dat file to ensure that you do not lose access to existing funds; EXISTING FUNDS WILL NOT BE RECOVERABLE USING THE EMERGENCY RECOVERY PHRASE UNLESS THEY HAVE BEEN MOVED TO A NEWLY GENERATED ADDRESS FOLLOWING THE 4.7.0 UPGRADE.

In the case that your wallet previously contained a Sapling HD seed, the emergency recovery phrase is constructed using the bytes of that seed, such that it is possible to reconstruct keys generated using that legacy seed if you know the emergency recovery phrase. HOWEVER, THIS RECONSTRUCTION DOES NOT FOLLOW THE NORMAL PROCESS OF DERIVATION FROM THE EMERGENCY RECOVERY PHRASE. Instead, to recover a legacy Sapling key from the emergency recovery phrase, it is necessary to reconstruct the bytes of the legacy seed by conversion of the phrase back to its source randomness instead of by hashing as is specified in BIP 39. Only keys and addresses produced after the upgrade can be obtained by normal derivation of a ZIP 32 or BIP 32 master seed using BIP 39.

The zcashd wallet has been modified to alter the way that change is handled. In the case that funds are being spent from a unified account, change is sent to a wallet-internal change address for that account instead of sending change amounts back to the original address where a note being spent was received. The rationale for this change is that it improves the security that is provided to the user of the wallet when supplying incoming viewing keys to third parties; previously, an incoming viewing key could effectively be used to detect when a note was spent (hence violating the “incoming” restriction) by observing change outputs that were sent back to the address where the spent note was originally received.

Would anyone care to update the thread about NU5 FAQs with anything relevant from this thread?

Oh, I’m probably being stupid here - this might be a testnet vs mainnet distinction, I tried to parse this on testnet. EDIT: YUP. Just me being stupid, my apologies - this is a valid mainnet unified address.