In this post I am proposing a crowdfund for an optimized Zcash GPU miner for all interested parties.

You may be asking, “GPU mining for Zcash at launch, is that possible?” Not only is it happening now but multiple parties are developing GPU miners. This new development has altered the previous perception of a fair CPU launch. As it currently stands, these GPU miners will be sold to private parties, putting the rest of Zcash early adopters at a disadvantage during launch; however, there is some significant interest in crowdfunding the software release to a larger body of interested parties. I propose we stir up enough interest that these miners will be in the hands of the many, not the few.

The GPU specs have not been made public at this time but are confirmed superior to CPU mining by trusted individual mining developers. The advantages between GPU vs CPU for mining Zcash is referenced in this Equihash paper in section VI.b. It’s roughly estimated that GPU miners will effectively speed up the mining process by 4x in comparison to CPU mining. However this estimate does not take into account High Bandwidth Memory GPUs, that may have much more competitive advantage than anticipated. Also, Zooko has commented recently in the #mining Zcash slack channel, that modifying the PoW algorithm to exclude GPU mining is not on the dev team’s radar given the amount of work that needs to be done in order to make the core product successful.

Two independent parties, @wolf0 and @ampy on the Zcash slack channel, are currently developing two separate miners. However, if we gain enough interest, they will collaborate to create the best GPU miner for our crowdfund. If we fail to generate enough interest, then we will have to hope that someone else will release a competitive public/open source GPU miner for free.

I am proposing to lead a crowdfund and put this software in the hands of the majority. In order to do this, please share what amount of bitcoin you would be willing to commit to acquire this software prior to launch. The goal is to collectively fall within a range of a 5 figure number, $USD. This will make the crowdfund competitive with private offers being made. The exact figure of the private offers has not been revealed to me.

Let’s do this! And keep the Zcash launch as fair as possible.

Update: After some negotiating between Ampy and Wolf0, it became clear that Ampy has an optimized GPU miner ready to go; therefore, we will continue negotiations solely with Ampy. We are getting closer to a deal and I will update everyone when I have something substantial to share. Keep in mind that Ampy is also considering other offers. If he agrees to our deal, he will release the benchmarks prior to the official crowdfund. Fingers crossed!

I agree with the need for a GPU miner but Zooko had mentioned his desire to crowdfund a CPU miner: 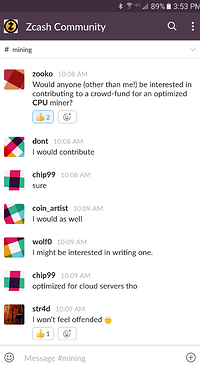 So perhaps we could set up 2 campaigns or we could propose that whoever commits to developing the GPU miner also make a CPU miner. Besides the CPU miner is already pretty far along in development: Zcash P2Pool Mining Development

I support this effort and will contribute to both but a fair start should not exclude those who do not have specialized GPU mining hardware. Both CPU and GPU will help with the goal of a decentralized network and protect against attacks.

I would support the GPU effort with 1 BTC.

I will commit 1 BTC toward the development of an open source GPU miner for the equihash algorithm.

I would also commit 1 BTC supporting an open source GPU miner for the equihash algorithm.

What hardware is needed or is recommended to run this software?

Any information is greatly appreciated.

I’ll commit 2 BTC to the crowdfund

I would contribute as well with 1 BTC

I’m in for 1 BTC if we can work out all the details.

Are contributions going to be held by someone that can be trusted to either pay the programmers upon completion or refund the contributors?

Is completion of the project open to anyone else?

@Voluntary
Yes, we’ll agree upon a publicly trusted individual to act as a mediator and hold the funds in escrow.

I’m not sure I understand your second question? Are you asking to contribute to the development? The two independent developers have agreed to work together only if the crowdfund is successful, I don’t think they are planning to expand this partnership.

No, I meant - Can an independent developer(s) compete for the reward?

@Voluntary
I would suggest that if you think you could contribute to the project, that you contact wolf and ampy on the zcash mining slack channel, and see if you can work something out. Otherwise, I would say no, because these developers have an established reputation and are known for these specific talents.

Agreed-- I’m not interested in putting up a bounty with a win condition for the first party to deliver (crappy or pre-created) software. There’s a proposal on the table to publicly fund wolf0 and ampy’s initiative. If they choose to recruit third party help that’s up to them. I think in the case of an equihash GPU miner, one collaborative development by trusted and reputable parties released free and open source would serve the zcash community best.

I’d be interested. I’ve got some noob questions before I can commit though:

I just updated the main post… You will receive a copy of the GPU mining client. GPU miners typically run on Windows machines and require GPU cards.

Why do you think I was asking if the reward should go to the first solution rather than the best solution?

I see, does that pretty much rule out mac users then even if the hardware is up to the task?