What made me change my mind about Zcash

I think they were a liberating influence. Personal opinion, based on conjecture: the team was anonymous because they had some people in Europe where intellectual property rights lean strongly in favor of employers. So to make sure the code would not later be laid claim to by some of their employers, they did the anon thing.

But I myself was cool with it because there was a non-anon responsible party we could pillory if there was an extremely subtle occult weakness designed into it. Satoshi was an architect (opinion: team of architects), not a “developer” (or developerS…) The code guys are ultimately responsible for the implementation of their code -not a systems architect. It is the coder and QA team’s responsibility to insure that the system works as advertised. An architect might feed the coder/coders a faulty design; but coders should catch that.

From your experience as such, can you see any way to sneak malicious code through Bitcoin Core’s gauntlet of security—from public reviews to reproducible builds, which deprive even the most trusted developers of the ability to sneak a bad binary?

Comes down to a matter of who (at the time up to its release) has more manpower to review it -the guys wanting to slip one in vs. the coders, QA people, and large communities of reviewers. And while I prefer open review to a closed one any day, even large open reviews can miss things. Developer accountability is the failsafe for that.

For that matter: do we really know that the bugs that were missed in bitcoin were not really just engineered weaknesses? I personally doubt it; but could be possible. Again: having accountable developers you can act against in concrete ways is the safety net for decreasing the likelihood of mischievous activity.

From your experience as such, can you see any way to sneak malicious code through Bitcoin Core’s gauntlet of security—from public reviews to reproducible builds, which deprive even the most trusted developers of the ability to sneak a bad binary?

Second of all, do you suppose that anything in the Snowden leaks is news to me? Hahah.

First of all, this is a total non sequitur: What does intelligence agency infiltration via fully non-anoymous, real-world identifiable operatives of the exact types of bureaucratic processes you should know from “traditional finance” tell us about pseudonymous developers in Bitcoin and other cryptocurrencies?

For the most spectacular example: The (purported) authors of Dual EC DRBG, the people at NIST who standardized it, and the people at companies such as RSA and Microsoft who widely fielded it, were all not pseudonymous cypherpunks! What you are really demonstrating is that “identifiable” parties provide only a false sense of security.

I have also seen, e.g., some first-hand descriptions on the cryptography list of how IPSEC was made so bad. (Sorry, no links handy—enough time searching.) What appeared to be incompetence, design-by-committee stupidity, and bureaucratic inertia really turned out to be the product of… a secret conspiracy. From your “traditional finance” experience, the whole process probably would have looked entirely normal and mundane. Only “real name” identifiable parties were involved.

What has this to do with Bitcoin Core’s development process?

(From your edit as I was writing and searching for links:)

Developer accountability is the failsafe for that.

Your link shows that your style of “accountability” provides no protection whatsoever against nation-state threat actors.

For that matter: do we really know that the bugs that were missed in bitcoin were not really just engineered weaknesses?

Which weaknesses? Besides some major bugs that would have no discernible purpose for an intelligence agency, AFAIK, Bitcoin has had three major security flaws: A garden-variety integer overflow in 2010, which IIRC was purely Satoshi’s fault—the transaction malleability design flaw, also Satoshi’s fault, fixed by Segwit—and the unexploited miner inflation CVE in 2018, which was accidentally introduced by a “real name” identifiable party (Pieter Wuille, who claimed responsibility).

Satoshi was an architect (opinion: team of architects), not a “developer” (or developerS…)

Sure, that’s a popular theory. In my opinion, it is a real “conspiracy theory” in the most negative sense. I don’t buy it. Have you ever examined the original code that Satoshi released? I linked to it in my first post on this thread. Another link, more prominent this time: 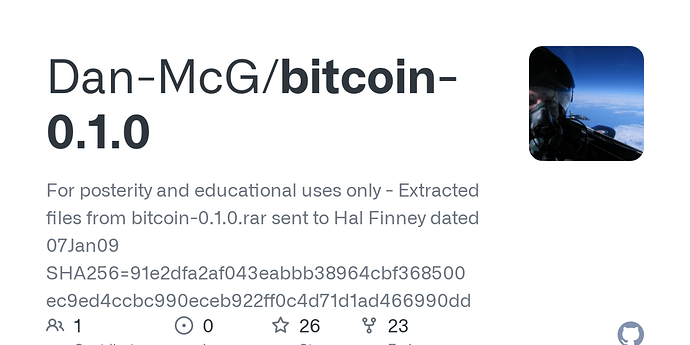 It looks to me like the product of a single eccentric genius, working very much alone on a project of breathtakingly huge scope. His public posts are also consistent with my opinion.

I think that some people just can’t believe (or don’t want to accredit) that yes, one lone individual can change the course of history by obeying the aphorism: Cypherpunks write code.

Your thoughts to that?

In fairness, I must ask if you have any thoughts on the benefits of pseudonymous developers who are de facto immune to legal attacks. This is no mere theory, when Craig Wright is now actively damaging Bitcoin Core development (and accordingly, also depriving Zcash of valuable improvements to its upstream).

Pseudonymous developers can simply ignore frivolous lawsuits. As a matter of Realpolitik, their presence also deters unjust laws and regulations: In practice, the prospective cost of enforcement decreases the likelihood of adverse legislation or regulation. I think that’s important for Bitcoin—and in the long term, potentially even more important for Zcash.

What does intelligence agency infiltration via fully non-anoymous, real-world identifiable operatives of the exact types of bureaucratic processes you should know from “traditional finance” tell us about pseudonymous developers in Bitcoin and other cryptocurrencies?

Your link shows that your style of “accountability” provides no protection whatsoever against nation-state threat actors.

Not all bad actors are nation-states; MANY are perpetrated by individuals or groups of individuals to make a profit. Accountability stops that. Will it stop nation states? Well: for openers, we can check the history of someone to see if they have suspect links to nation states BEFORE they are trusted to work on code (what can be done after they succeed in infiltrating? little, of course; but an ounce of prevention…)

and the unexploited miner inflation CVE in 2018, which was accidentally introduced by a “real name” identifiable party (Pieter Wuille, who claimed responsibility)

Good thing; what if it had been an anon and they didn’t speak to it; just suddenly went permanently radio silent when confronted about it? That would be most unpleasant.

It looks to me like the product of a single eccentric genius, working very much alone on a project of breathtakingly huge scope. His public posts are also consistent with my opinion.

I have a counter-explanation to how it is more than one person; if you or anyone else is interested, you can message me privately on this forum. Seeing as how this is a zcash forum, I don’t want to veer off on that topic too much.

But to the mods: understand that much of what has been discussed above is relevant because I am a former bitcoin stumper who sees possibilities in zcash that no longer exist for bitcoin [again: bitcoin as digital gold is a HUGE success; but not for the “money of the Internet”] So it was unavoidable discussing on this thread, when challenged, as to what I see as the gaps in bitcoin’s functionality that has piqued my interest in zcash

You added this later, so I just saw it. This has happened with many/most of your posts; I know only what caught my eye scrolling around. I will not waste my time rereading the thread to see what else changed. Please stop that.

How much experience do you have with development, or even with closely following it?

Over 30 years, commercially; a mix of traditional finance and crypto.

[FYI: This appears to be steering towards a personal attack; which is not in the spirit of positive discussion. Look at all my replies above; while I disagree with some of your viewpoints, I don’t seek to question your bona fides. In the interest of keeping things positive for zcash, please lets steer away from questioning each other’s cred for merely having expressed a differing viewpoint…]

When we are discussing this before an audience that mostly consists of non-developers, and the arguments that you express come off as what could only be said by someone new to this space and unfamiliar to the development process, then your level of experience is relevant to the discussion.

Too many of these types of discussions result in uninformed speculation: The blind leading the blind. It is not the first time that I have seen it.

By analogy, if we were discussing safety standards for vaccines, and if you made a statement about pharmaceutical development processes that showed a patent lack of experience in the field, then it would be legitimate to make an analogous inquiry—not a fallacious ad hominem or personal attack.

Please don’t take questions about your level of experience as offensive: If you had no development experience whatsoever, as the overwhelming majority of people do not, would that be cause for embarrassment?

As it stands, this discussion has gone into rapid-fire back-and-forth replies that wildly diverged from the topic. I am not here to chat with you personally; if the thread is uninteresting to others, then I am uninterested in continuing this discussion.

Understood; it just had me getting nervous as to that was where we might be going (I was exercising an ounce of prevention…)