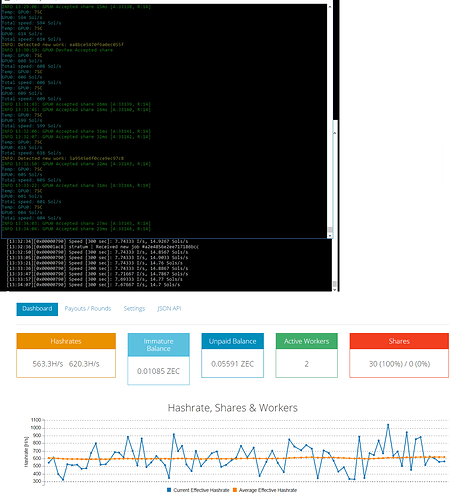 what mining software did you use?

check your network and don’t use WIFI or something wireless network, just use cable making sure your network is healthy

I checked all my cables and they are fine. I am using an Ethernet cord instead of WIFI as well. For my GPU, I am using EWBF’s CUDA Zcash miner 0.3.3b on a windows computer.

shares dont really matter, if you look at the Hash rates their nearly on point so thats good. I can get a million shares with 200H/s and a difficulty of 1, doesnt mean they will pay off more.

on smallest grid i have i get 10417 shares on a 36413 sol/s so thats not even near your counts, but you must account for difficulty as well … perhaps you get high difficulty shares which you get less amount, but worth more

Flypool has a standard, static diff of 2000, so unless the OP uses a higher diff, given to the pool using the “password” parameter, that wouldn’t account for his share count. Rejected shares would.

I haven’t changed any difficulty on my end. I just thought that my miner or the software was limiting my payment. I would have thought that I would get more than 0.05 ZEC per day with 600 H/s. Maybe I am wrong but I thought I would get around 0.1 ZEC a day.

@Blue .05 ZEC per day is about average for 600 Sols/s check out the calculator at WhatToMine - Crypto coins mining profit calculator compared to Ethereum Classic it is usually pretty accurate