Starting today we will be announcing Zcon3 Speakers!

First up is Jordi Baylina, an outstanding member of the Ethereum community and part of the White Hat Group. He’s the co-founder of iden3 and the main contributor to circom and snarkjs. Currently, he’s the technical lead at Polygon Hermez, building a zkEVM. 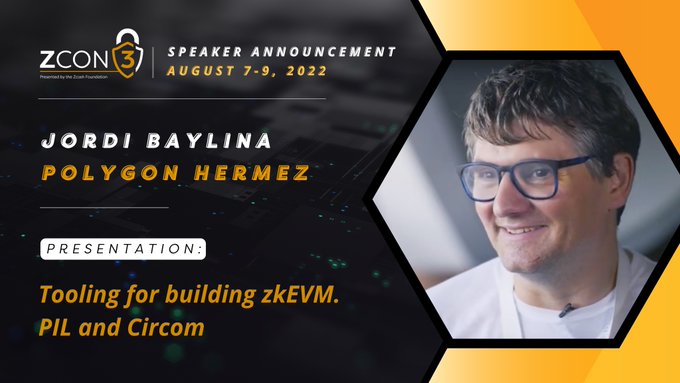 Next up is @LeCryptoMath, Daniel Benarroch has 8 years of experience in cryptographic research. He has designed and built several products based on privacy-enhancing techniques and is currently leading strategy and the Research team at QEDIT. 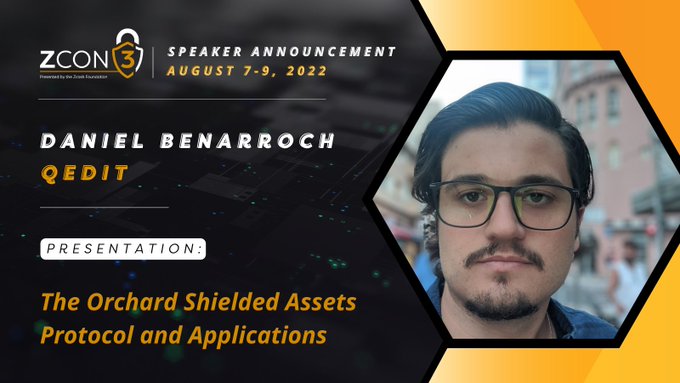 Jack(@str4d) is a cryptographic engineer who started at the ECC as a software engineer & ex-physicist in 2016. He built Zcash’s PoW subsystem & has since contributed to the design & implementation of most of the consensus protocol changes. The first half of this talk will cover an overview of the Orchard protocol and provide a medium-level introduction to Halo 2. The second half of the talk will go into detail about the work that ECC did to achieve the performance goals for the Orchard circuit. 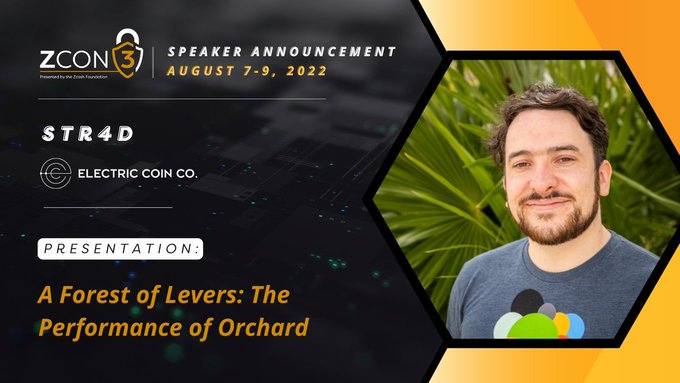 Pratyush Mishra is a cryptographer at Aleo, working on developing & implementing zkSNARKs. He recently completed his PhD from UC Berkeley, where his research focused on new constructions and applications of zkSNARKS. In this talk, Pratyush will introduce a new paradigm for Proof Carrying Data constructions that rely on much simpler ingredients while simultaneously improving asymptotic and concrete efficiency. 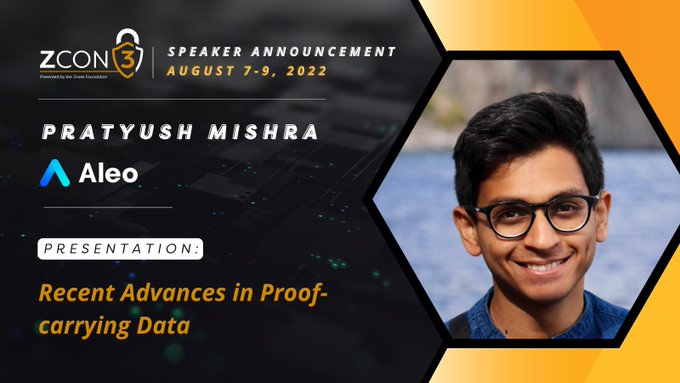 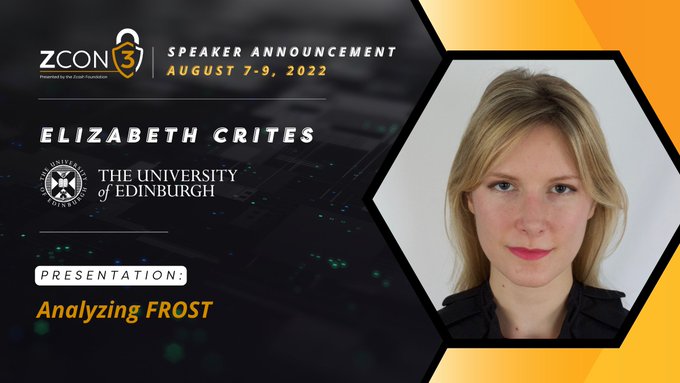 @daira Hopwood is a cryptographic engineer with the Electric Coin Co. Ze contributed to the design of the Sprout, Sapling and Orchard shielded protocols, designed the Pasta curves, and is a ZIP Editor & the lead author of the Zcash protocol spec. Daira’s talk will be a deep dive into the security properties of the Zcash protocol and the cryptographic assumptions they depend on. It aims to give an intuitive but detailed explanation of why Zcash is private, maintains balance, and enforces spend authorization. 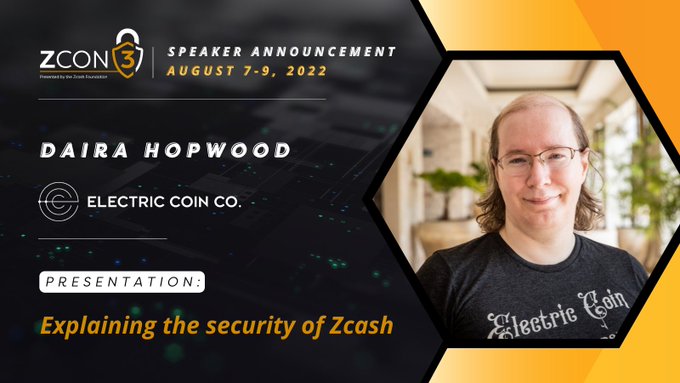 Chris Tomeo has been Head of Growth Marketing at the Electric Coin Co since February. He started working on Zcash-related projects in 2018 when his agency AdjyCo was hired to help with the Zcash brand, messaging and web projects. Chris’ presentation will focus on ECC’s marketing research and PR approach as well as its growth plans across different segments. 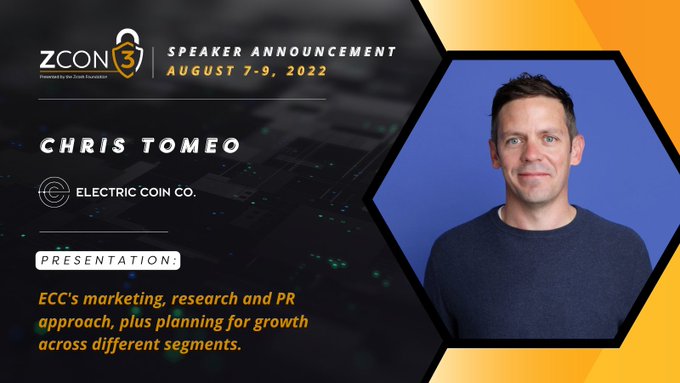 Kurt Opsahl is the Deputy Executive Director and General Counsel of the Electronic Frontier Foundation. He represents clients on civil liberties, free speech and privacy law, and counsels on EFF projects and initiatives. Opsahl will discuss the importance of protecting and preserving civil liberties through technologies, and the “why” behind financial privacy - the fundamental rights at issue, including avoiding financial censorship and keeping the power of existing centralized hubs in check. 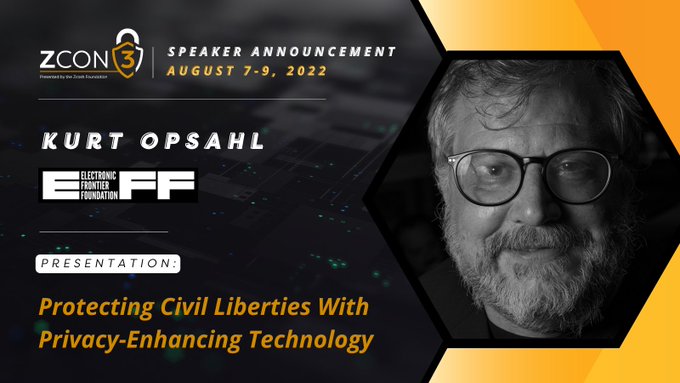 Michele is a postdoctoral researcher at UC Berkeley, interested in ZK proofs & more broadly in cryptography. His research includes building authentication mechanisms that preserve user privacy & anonymity. Michele will present Gemini, an elastic SNARK. He will dive into the streaming algorithms that lead to space-efficient provers & the implementation challenges they run into while developing space-efficient SNARKs in arkworks. 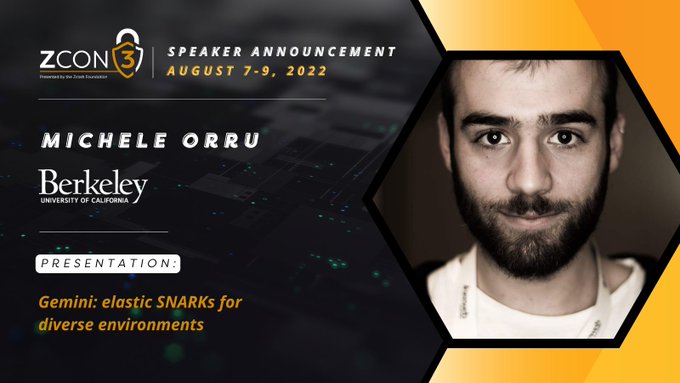 Michael is the Head of Solutions Architecture at OpenZeppelin, where he offers web3 security advice to leading financial institutions and blockchain protocols. Michael will be tackling how to build governance systems for protocols to handle increasing levels of complex decision-making, how to ensure protocol upgrades are secure without gate-keeping as well as how proposals should be developed and passed without cumbersome bureaucracy. 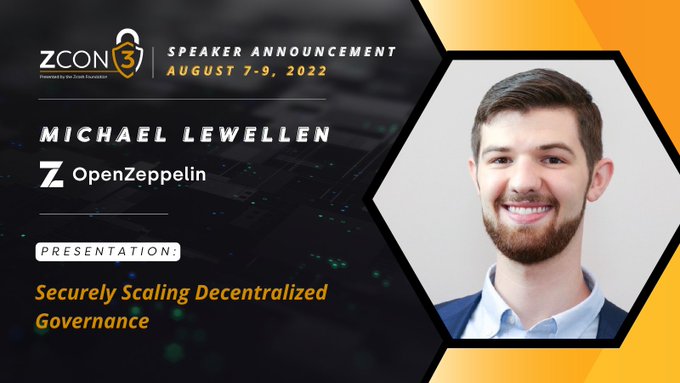 Steven Smith is currently SVP of Engineering and Product Management at the Electric Coin Co. Steven has over 20 years of experience in Engineering and Product leadership roles. Steven’s session will cover the progression of Blockchain eras, how integration technology has evolved, and the current state of research on interoperability options for Zcash that ECC is conducting. 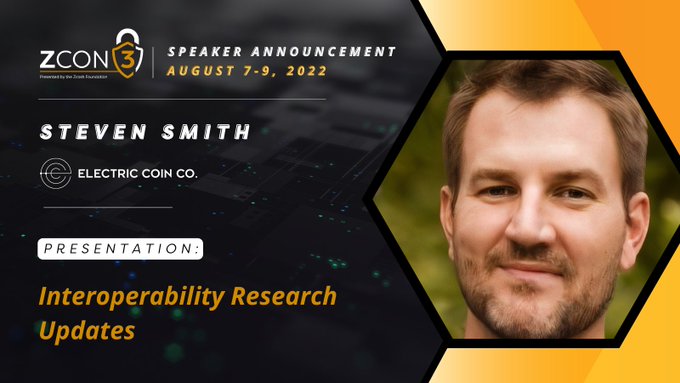 Josh Swihart is SVP of Growth at the Electric Coin Co, where he is responsible for communications, regulatory, education, community, partnerships, and strategy in support of Zcash. ECC has recently pivoted its strategy to focus on delivering a world-class UX for ZEC in support of the adoption of the ZEC token for peer-to-peer and Web3 payments. In this session, Josh will provide an overview of the implications of this strategy shift and the progress they have made so far. 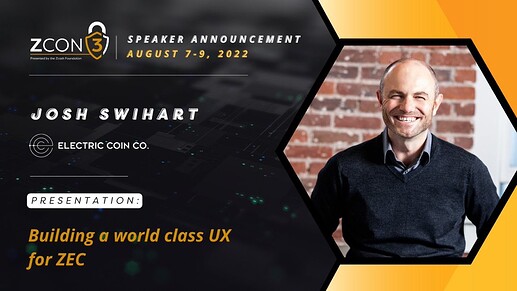 Isabela Fernandes is the Executive Director of the Tor Project since November 2018. She joined the Tor Project as Project Manager in 2015, after working as Product Manager for International and Growth at Twitter for four years. The Tor Project is a non-profit that builds Tor, a technology that allows people to be anonymous online, protects their privacy and helps them bypass internet censorship. However, sometimes we think more about the technology and not as much about the people using it. This talk will share some of these stories to help uplift the Tor Project mission - which is to help advance human rights. 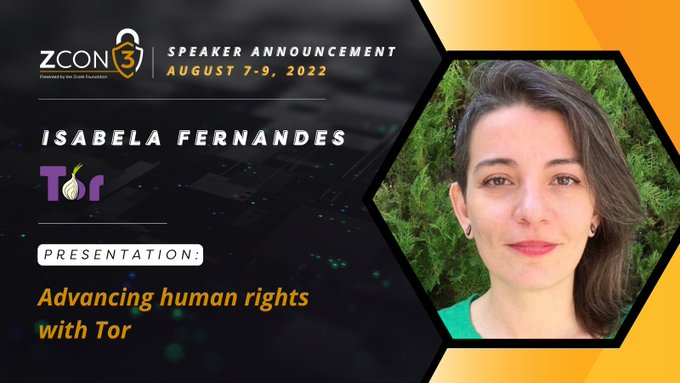 Dean Tribble is the founder and CTO of Agoric. Dean co-designed the negotiation process and contract for the first smart contracting system, AMiX. As a Principal Architect at Microsoft, he co-designed the Midori distributed object-capability operating system. During his session, Dean will provide an update on Agoric and its next steps for interoperation with ZEC. 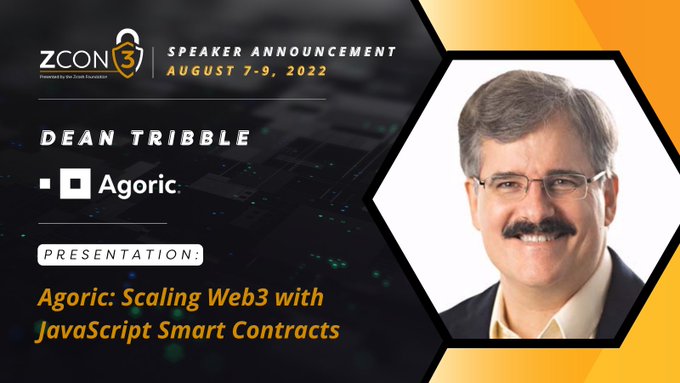 @aiyadt is the creator of the Nighthawk Wallet and a member of the Zcash Community Grants committee. He has a background in Electrical and Electronics Engineering & Entrepreneurship. Aditya has contributed to the Zcash eco-system by onboarding several developers to work with the Light Client Working Group, running http://lightwalletd.com infra, http://ZcashBlockExplorer.com and soon the Zcash integration with THORchain. During this workshop, Aditya will show new users of Zcash how to use its mobile wallets. The workshop will also focus on UI/UX & feedback on Zcash wallets from the Zcash community. 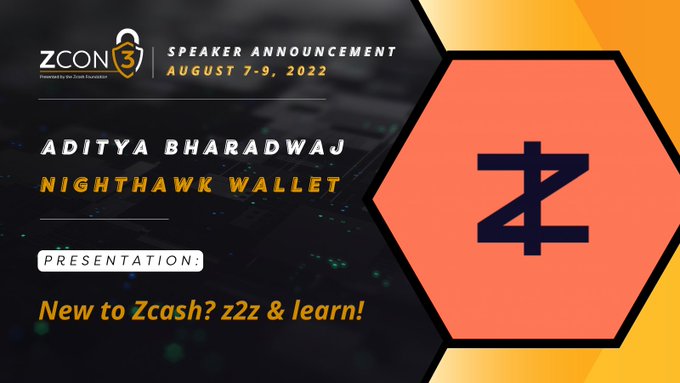 After a multi-year effort with lots of hurdles, the Zondax team will finally demo their complete Ledger support for shielded Zcash transactions in Zecwallet. This work has been the result of a large team effort, involving multi-disciplinary tinkering and frustration handling, and overcoming the many challenges this project entailed has required careful design and painstaking implementation. During their session, the Zondax team will summarize the process, challenges, and solutions that lead to their ultimate success in the final demo. 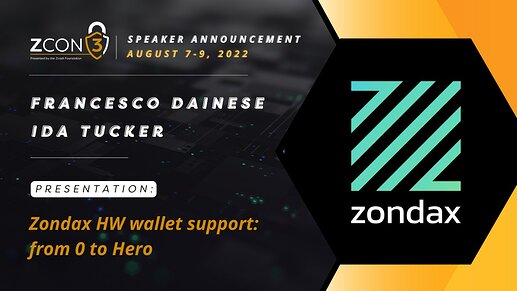 The Electric Coin Co. has shared its interest in moving Zcash from a PoW consensus mechanism to PoS. They started their research phase in the fall with the goal of producing a concrete transition proposal for the community. This session will provide an overview of ECC’s research areas, the preferences they’ve developed for each, the rationale behind those preferences, and their latest focus and thoughts on proof-of-stake research. 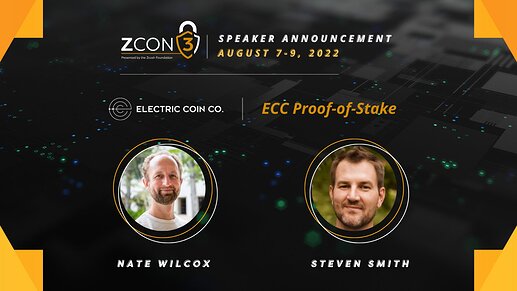 Skylar Saveland self-describes as an engineer, a father, and the creator of Free2z. His co-founder Jonathan, is a software engineer who has developed scalable solutions for leading companies in the technology sector. During their session, Skylar and Jonathan will focus on the aspects of integrating Zcash into a traditional website for payments and automation, explaining why it’s so easy if you make a few key decisions! 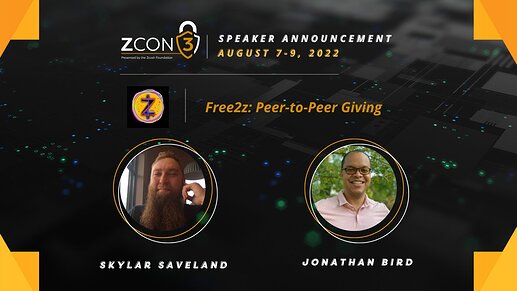 A large part of the effort for the latter stages of the Zcash NU5 development was integrating newer NU5 features with older pre-NU5 technologies. The ECC has already initiated a policy for Sprout that limits transfers into the Sprout pool but there is a need for a more general set of guidelines for how to retire older pools and technologies so that Zcash can move faster with its engineering efforts and reduce protocol complexity. This session will present some of Steven and Nathan’s thoughts on how this could be accomplished, including a discussion of the social aspects of pool retirement. 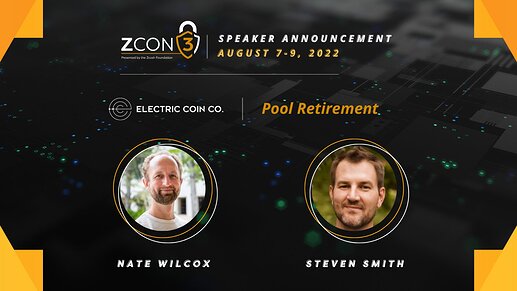 Jack Gavigan joined Team Zcash in early 2016, as an advisor to the ECC, and subsequently joined the company full-time, serving in a number of roles, including COO and Head of Regulatory Relations. He left ECC in early 2021 to become Executive Director of the Zcash Foundation. Jack’s opening address will cover this year’s Zcon3 theme: “Code Alone Doesn’t Cut It.” Through this theme, the Zcash Foundation wants to highlight the importance of not only the R&D and tech of Zcash but also the vibrant community and ecosystem being built around the protocol. 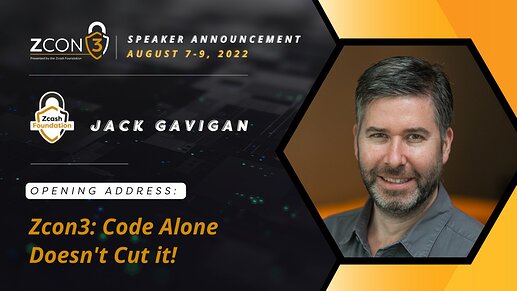