Seeing a lot of these errors in debug.log & its taking a long time to find more peers, not noticed this behavior before.

I saw a similar thing on a zebra node, connection timeout but I just switched the endpoint to a closer router and it seems to have fixed it. I have a zcashd node too but it looks ok, Ill check the log and see

It is syncing & it does eventually find enough peers, just seems to take a lot longer than before.

Not a bug, just an observation.

My debug was half a Gb

so I restarted and rebuilding one, Ill check back shortly.
And yeah it all seems slightly heavier now idk

Ok well I decided to add the more advanced[ conf options, was running it empty and so reindexing. Made a lil script that it prints new lines added to the conf so I dont have to keep refreshing it, seeya in about 2 days! 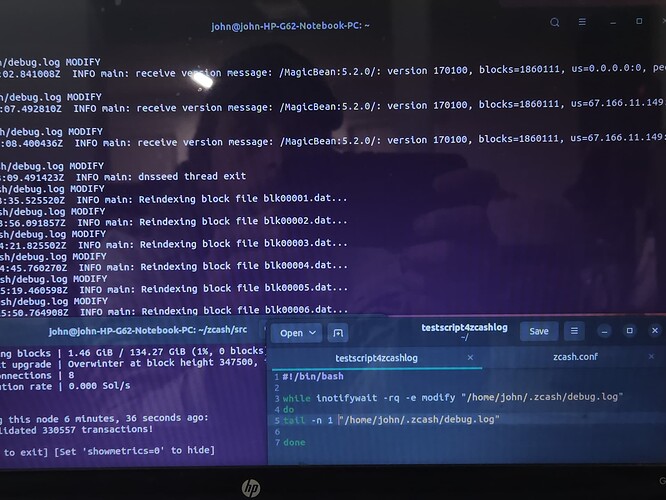 I changed my color scheme 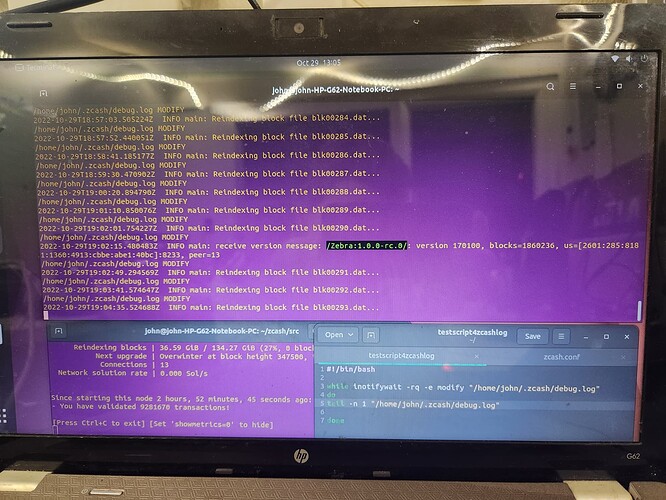 It’s getting there. I think I like v20 laser puma better than this v22 jellyfish

PS you should try zebra, it’s way fast plus the rpcs for supporting mining are coming up

Observations: The terminal vanished 4 times over the past few days (systemd I presume is the culprit) but fired back up ok. Chugging along until 92% just past 1.7M-ish and it slowed waaaaaay down. Gonna restart and see if it helps at all, the cli stop cmd vanishes the terminal again! This device aint all that fast but it aint that slow either, dang jell-ofish

Maybe one day our ‘clever people’ will get GPU/CUDA code into a node.

Mother of invention! I just shouldn’t have stopped it I think

though at the rate it was going (will probably go again) it would have taken like a week (started a zebra docker on a slower machine yesterday just for low end benchmark across wifi (zcashd is wired) and it’s approaching 1.4M…
7hrs later- 1.6M, getting to the fun part now! zcashd has reindexed 110GB, close…
and it’s gone.
Without the experimental features and tx index flag set it seemed to run kind of OK but I didn’t touch it anyways and given how finicky it is now with those flags set I wouldn’t consider it usable either on A this level of hardware or B the particular distro (or C, both). Terminals didnt used to just vanish like this nor did that little gear in the side just pop up for 2 seconds and poof! gone. I have faster machines to run zcashd on but I may roll this back to 18 or 20 and try again before I switch.

I decided Im gonna try Lubuntu 22, less regressed I think, behaves the same in the terminal but lighter display manager (Its what Ive got that zebra docker on the slower computer running in).
It seems to be running smoother, hasnt vanished yet. Theres a jellyfish on desktop too

. That hummingbird’s a lil chubster! 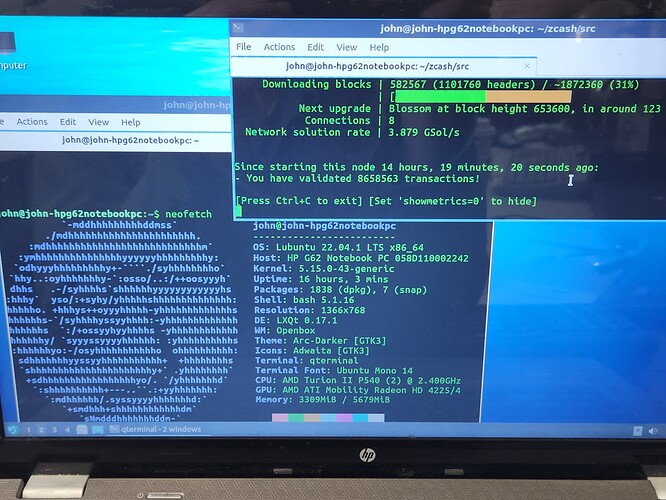 The other, you can see theyre similar, tbis one has less memory and slower 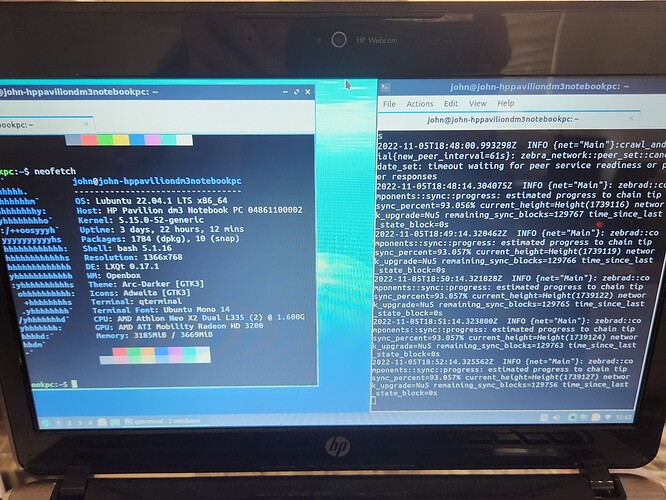 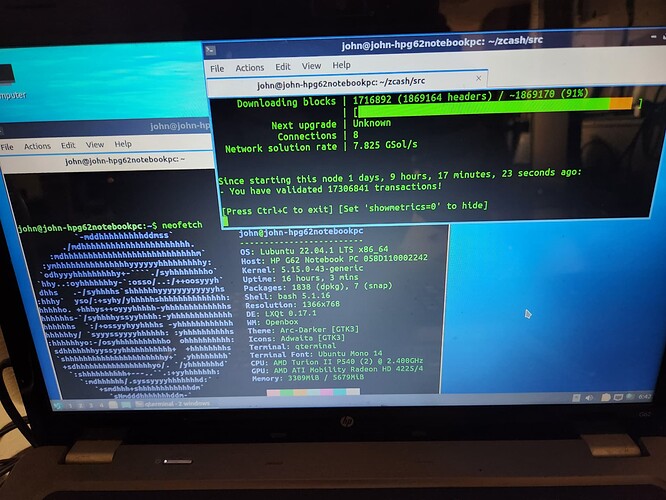 I have xubuntu 18 bionic x86 rumning in an emachine amd64 designed for winxp with 3.7 GB ram, it’s pretty cool and the end of the line for canonical x86 I think.

I’ve used Ubuntu, Kubuntu, Lubuntu, Arch, and Gentoo but I’ve settled on Xubuntu for its simplicity and low resource usage. If you want to head dive into linux to learn fuck up, Gentoo is the best

I dont know… I was looking it up and while Xubuntu is ligjter than Ubuntu or KDE it’s still twice as heavy as Lubuntu which filters more basic applications, LxQt only uses 256M vs Xfce 512M. 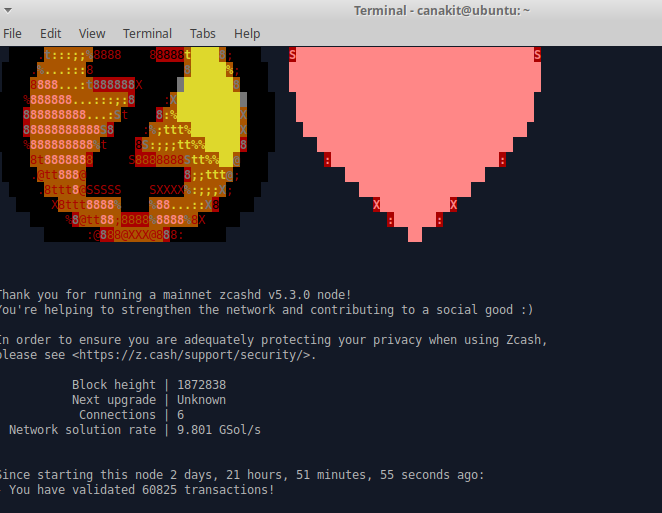 Its low usage + a windows/MacOS similar UX that is simple that I feel in love with.

Cool! I was thinking how xubuntu looked a little different and so I wondered about their differences. I have Ventoy on a big flash drive with like over 30 diifferent iso’s so I’ve got no shortage of weird flavors to try! It’s a neat tool, after its installed on the stick you just drag and drop whatever iso’s on or off it, no additional flashing. I had a couple flashed with installers but the rest all on cds. Now theyre all on one flash drive, it’s convenient.

so close! 1876855 at 11 1/2 days! raw core-duo power! should tip tomorrow prolly!!
I stepped on the power supply just right to the slower 1.8ghz laptop running the zebra docker and it stopped around 98%, it would have taken another few days/week. The proper machine is at 1.83M now at 4 2/3 days and so will probably tip at about the 1 week mark.

The zcashd node stopped and restarted successfully yay so should fire back up and sync in a reasonable amount of time if/when I need to.
The faster machine is at <10k to go
Also fyi 5.2.0 EOS’d yesterday 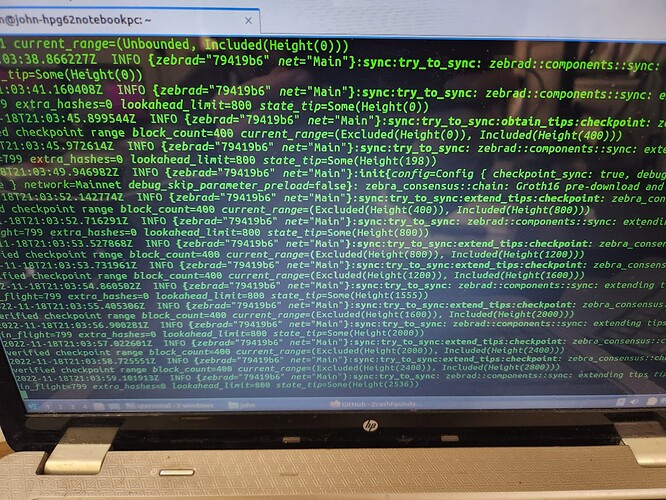 And obviously the proper vs. comparison would have been syncing a zcashd node with the wallet functionality disabled. Honestly, I don’t want to do that

Who does that? Idk

1.77M at almost 4 days total
1.86M at 8 days, should tip soon
I suppose it is worth mentioning that it’s syncing an extra 10k blocks or so which is a little bit time

Going back to the original topic; are you still seeing those peer stalling warnings often? I’m not seeing much of any really

Ok, next: I’m gonna copy over the zcashd folders to a stick and then run it externally on the even-slower computer so I dont have to sync it. Prolly gonna run pretty slow Im thinking just because its external, just a usb2 but well see if it keeps up.