SILENTARMY is a free open source Zcash miner for Linux with multi-GPU and Stratum support. It is written in OpenCL and has been tested on AMD/Nvidia/Intel GPUs, Xeon Phi, and more.

Be sure to check the README for installation instructions: silentarmy/README.md at master · mbevand/silentarmy · GitHub

SILENTARMY was initially written as a command line solver for the Zcash open source miner challenge. Its OpenCL kernel is more optimized than any other public Equihash solver, so as a result it was integrated into multiple other miners: Zogminer, Genoil’s miner, eXtremal’s miner, etc. But now I have developed SILENTARMY into a full miner of its own.

Update: Claymore has been using some of SILENTARMY’s code without respecting the MIT license, but the issue is now resolved: Summary of Claymore's miner infringing on mrb's SILENTARMY miner MIT license

SILENTARMY has been tested and is known to work with various pools: 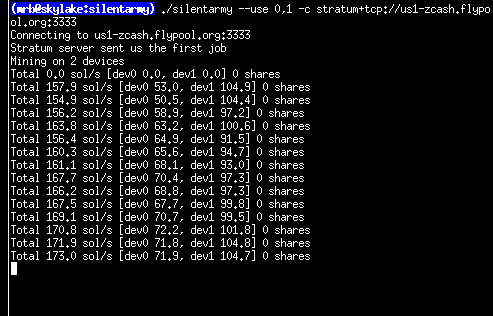 The initial version of this post has been preserved below the line, for historical reasons:

Some of you might recognize my handle from the Bitcoin community. I wrote hdminer which was at one point the fastest GPU miner (The fastest HD 69xx miner. 250 BTC.) and I introduced and documented the technique of down-plugging PCIe x16 GPUs via x1 extenders (from my password brute forcing research: Whitepixel breaks 28.6 billion password/sec).

Well, I am pleased to announce my submission to the Zcash miner challenge.

SILENTARMY is an OpenCL solver that runs best on AMD GPUs. The code is unoptimized - this is a version I just got running for the first time this morning (12 hours ago) and I spent the entire day tweaking some settings and running tests. The performance is:

Are you able to port it to CPU miner with xenoncat optimizations?

Wow this sounds really good!!! I really hope to see a windows version

Great work! Can’t wait for the integration! Thank you for your effort!

I did not read about running two instances

Bravo! God job!!! This numbers are in the same range as toomim’s claim.

So what needs to be done to get the same results as above?

So what needs to be done to get the same results as above?

As he clearly states in the readme i did not read. You have to run two instances of the solver on one GPU

Looks like we have to wait till tomorrow for some answers since his gone to bed.

That is really impressive.

Funny how he releases a GPU miner for FREE while Toomin’s Bros thinks their miner is worth $750K.

I suppose the guy will be the winner of the zcash openminer challenge!

indeed… greed of some people just has no boundaries!

I have not tried running on my dual RX 480 rig yet as I need to get a new SSD.

Keep up the awesome work.

Anyone successfully build this in MINGW32 on Windows 7?

I suppose the guy will be the winner of the zcash openminer challenge!

Technically it is just a kernel and not a miner at all. The real winners are the community here.